"The NAB Show is the world's largest convention encompassing the convergence of media, entertainment and technology. The general consensus was that despite the crowds around certain stands, attendance might have been lower than previous years. Wednesday and Thursday seemed quieter, so it will be interesting to see if this is proved when the attendance figures are released. You can read our show magazine at your leisure!"

In previous years there always appeared to be a theme to the show. 4K, Virtual reality or the Cloud. This year there was nothing so obvious, although there’s lots of talk about IP, automation and artificial intelligence.

There was talk of beyond 4K – with 8K screens and cameras. A huge 8K Crystal Display drew great admiration. Sony and Panasonic both unveiled an 8K broadcast camera but it’s early days for the technology.

In the taxi from the airport to the hotel we all passed the convention centre and got a brief glance at a teaser poster from Blackmagic Design for what would probably be the star of the show, the Pocket Camera 4K.

RedShark News named this as Supreme Best in Show and even other manufacturers could not help talking about it. I can’t remember one product causing so much of a stir since the first Blackmagic Cinema camera arrived.

I saw the camera first at the launch event just before the crowds descended on it and the low light performance looked incredible. It’s too big really to be considered a pocket camera, with a 5-inch touch screen on the back and big handgrip, but it’s worth the hype. It has a single XLR input with the high-quality pre-amp from the Video Assist 4K and as well as SD card and CFAST it can also record straight to a USB-C SSD. There were rumours of thousands of pre- orders being placed at the show, with third party accessory manufacturers keen to develop battery, cage and viewfinder options.

In their press conference Blackmagic announced out the news that the Hyperdeck Mini will start recording and playing back H264 files with a firmware update. This makes this little box all the more interesting in the AV world.

There was fanfare about the new ATEM Television Studio Pro 4K, which is an evolution of multiple technologies. Although the camera stole the limelight, it’s a remarkable piece of kit. Each of its 8 inputs has a built in Teranex Converter, it has Fairlight Audio EQ and delay, very clean chromakey and Ultra HD multiscreen output.

Blackmagic also released high end audio Fairlight desks, and a bunch of new Mini and Micro converters. A new version of DaVinci Resolve becomes even more powerful with the inclusion of Fusion. Fusion is a high end special effects package like Adobe’s After Effects. A sort of animated Photoshop. DaVinci is unstoppable.

For Holdan, distributing their battery and power supplies across Europe is incredibly exciting as the technology is cutting edge, the range is very wide and the Core SWX team are great to work with. The 198Wh flight safe battery is a great idea and their batteries for the Sony FS5 and Panasonic EVA-1 with power tap outputs will be a godsend to many.

SmallHD attracted hundreds to their booth with a daily giveaway of Focus monitors. A 15-monitor giveaway gathered crowds of about 300, and all had to be registered to the booth to get entry to the draw. It was a great spectacle as the SmallHD booth was outside in the hot Nevada sunshine. Unfortunately, we didn’t win one.

SmallHD releases included SDI and OLED versions of the Focus Monitor as well as new wireless Focus Bolts. Now with built-in wireless, SDI and OLED options in the Focus range, expect SmallHD’s 5” range to become the de facto monitor in the industry.

Teradek previewed the new XT and LT Bolt designs. They are designed around a smaller form factor, making them easier to transport and mount. The XT range has every conceivable bell and whistle like signal conversion and the spectrum analyser which make them perfect for use in film and drama production. The LT range is designed for the independent operator, giving great performance at a low price.

The new Vidiu Go seemed to garner plenty of interest. We love the new industrial design. Available with or without up to 2 new nodes this Vidiu has H.265 encoding, Bonding through Core and both HDMI and SDI inputs. Its chipset is very powerful so should really perform well.

Link Pro debuted too. It can bond 4G, WIFI and Ethernet to get any data up to the Internet. It needs a Core subscription to get the data back at the other end. The picture is of the Raydome. Its 4 Nodes arranged in a waterproof housing that would look at home on the top of a super-yacht.

Panasonic’s stand was busy with lots of mentions of NDI and the nearly released. The AV-HLC100 All-In-One Live-Stream Production Centre was centre stage. At the heart of the production, it's SDI, NDI, HDMI and IP inputs re-define workflow versatility.

There were no new camera announcements, but Panasonic was always very busy, showcasing their cinema and studio camera ranges as well as their PTZ cameras.

They had lots of talks about EVA1 and Varicam which were well attended and the new EVA1 firmware seems to have gone down a storm.

Datavideo debuted the Nighthawk Camera, pointing it into a dark model cityscape to show off its low light abilities. The Nighthawk is unique in what it offers, having HDMI and dual 3G-SDI outputs and XLR ports. I’m sure Nighthawk will do well in low light live situations, such as conference centres, houses of worship, theatres and lecture halls.

There’s a lot of cool new stuff coming from Datavideo including the HS-1300 portable production mixer with built in monitor, recorder and streaming encoder. Plus the NVS-40 quad encoder looks unbelievably good for the money.

LEDGO showed larger and smaller versions of their RGB lights and a refined WiFi Box which takes NPF Batteries.

Sonnet Showed off more eGFX Graphics boxes, especially the 650W version and a new superfast Thunderbolt CFAST 2 reader. They demonstrated accelerated performance of Cinema 4D and DaVinci Resolve which was really impressive. It was good to see the new 1TB Fusion drive, especially after its rave review in Definition Magazine.

Designer Andrew says the MicroPrime lenses are designed with an image circle large enough to cover full-frame sensors and have a similar weight distribution across the range for easy swapping when using a gimbal, and there is an internal focusing mechanism. The company also says the focus gears were designed with "a throw slightly longer than photographic lenses but still manageable when a motorized follow focus is not used." 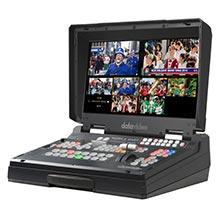 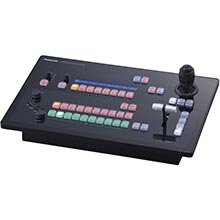 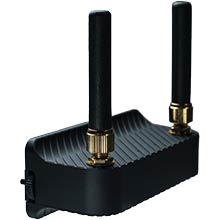 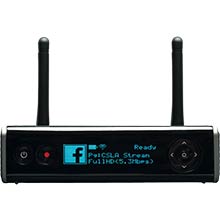