PTZ cameras are not like traditional camcorders. A few can record video internally to a Micro SD card, but these are the exceptions rather than the rule. Lumens, Datavideo and the high-end Panasonic PTZ Cameras (like the AW-HE130 and AW-UE150) do not have internal recording so we must look at other options.

The Panasonic AW-HE38, AW-HE40, AW-HE42, and AW-UE70 can all record HD, (the UE70 can even record in UHD). This internal recording can be very useful, but it is heavily compressed so the quality is not as good as the cameras are capable of.

Recording the IP Stream
Using software like VLC or Datavideo DVS-200 Software it's possible to record the video stream produced by PTZ cameras with an IP output.  This can be done over a network connection. It does produce a compressed result which may not be suitable for editing or broadcast, but it’s useful for lecture capture and archiving, as well as providing record of meetings or product testing. VLC can record one stream and the Datavideo DVS-200 software can record multiple streams into one PC. Other IP recorders include the multi-channel Lumens LC200 and Epiphan Pearl 2

Using a separate recorder
To record higher quality files suitable for editing or even broadcast, you could use Blackmagic Design Hyperdeck recorders.  HyperDecks record into higher quality codecs like H.264, Apple ProRes or Avid DNX onto media like SSD drives, SD or CFast cards, depending on the model. HyperDecks can be remote controlled and recorded files can be copied over a network via FTP if using the HyperDeck Mini.

The files the HyperDeck can record tend to be very large as they are not heavily compressed.  The HyperDeck Mini can record more compressed H264 files onto SD cards, but only from HD sources rather than 4K.

Other recorder options include the Video Assist range from Blackmagic Design and the Datavideo HDR-1.  The new Video Assists are really designed for field recording; however, they can record up to 4K 60p onto SD card or even a portable SSD.  The Datavideo HDR-1 records HD H264 onto memory sticks, this is a good option if the PTZ camera does not have recording or streaming.

PC Based Recording System
Customers who want to record and / or stream multiple cameras in HD can use a Datavideo DVS-200 turnkey system.  This is a powerful PC with up to 16 SDI or HDMI inputs which can be simultaneously recorded and streamed. The files are compressed H264 so don't take up too much space, and the system can even be set to automatically delete them after some time.

Telestream Wirecast runs on Windows or Mac platforms and records incoming IP, NDI, SDI and HDMI streams. It's scalable depending on the power of your workstation - for a fully optimized system, check out Wirecast Gear 420.

Complete Production Solutions
Epiphan Pearl 2 and Telestream Wirecast production systems can record multiple feeds from PTZ cameras as well as stream to Facebook/YouTube/Twitch. These one-box solutions can mix sources, add graphics and titles to make a slick live production as simply as possible.  Because the separate camera feeds can be recorded, you can also create an even more polished edit at a later, using this footage.

4K Recording
If you want to record in 4K and you are using the Panasonic AW-UE70 PTZ camera you can use micro SD Cards internally.  With other 4K cameras you will need an external recorder, and the best option is the HyperDeck range from Blackmagic Design. Do remember that the high-quality files that the HyperDeck record will take up large amounts of disk space, so ask yourself if good quality HD recording would make more sense from a media and data storage point of view.   Another option for 4K recording is using the Epiphan Pearl-2 with the 4K upgrade. This can record between 50 to 100 hours of 4K footage onto its 512 GB internal SSD and automatically copy this onto network or USB storage if required.

Finally, remember that recording the output from every PTZ camera, especially in high quality, is going to use up a ton of hard drive space and mean you will have to edit it at a later stage.  By using a vision mixer or all in one production unit you can save both editing time and hard drive space.

Portable all in one 5 inch HDR monitor, recorder

Portable all in one 7 inch HDR monitor, recorder 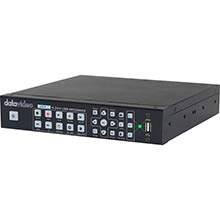 All in one video encoder and video production system

All in one video encoder and video production system - Rackmount 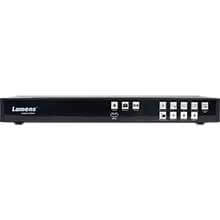