Network functionality is also bolstered with newly-added streaming, facilitating full HD output (wired, wireless**, 4G/LTE network***) during recording****. The implication for news gathering is that a breaking news event can be streamed to a broadcast station while acquisition is in progress in the field.

In addition, Panasonic has added the “Rec during Uploading” function to the AJ-PX270 to allow automatic transfer of recorded contents to an FTP server, which means that recording is possible even while video content is being uploaded.

The firmware also supports a new iPad based P2 Remote Operation Panel (ROP) application, which enables wireless control of the PX270 camera settings (such as picture quality, zoom, focus and rec/stop operation) using an iPad. The P2 ROP App will be available free of charge at the Apple App Store.

These upgrades are available for downloading effective today at the Panasonic service support website, http://eww.pass.panasonic.co.jp/pro-av/support/content/download/EN/ep2main/soft/upgpx270_e.htm. 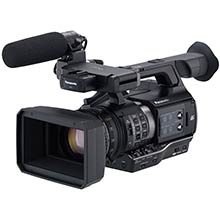