A look behind the scenes as to how our Product Specialist Kriss Hampton recently ran a live training session with hundreds of online viewers.

Yesterday I ran an interactive webinar from my home office to the customer of one of Holdan’s resellers, Wex Photo Video. This session was designed for those just starting out in their filmmaking journey, making the most of the current climate and using time indoors to do a spot of training. It was all about the basics of camera controls, understanding video terminology and an introduction to creative filmmaking.

Of course, this can be a lot to cover in the one session – especially more so doing it remotely, as a lot of the points I’m conveying are of course very visual. However, with a proper streaming setup, coupled with a fantastic piece of software, the end output was a mixture of a presenter camera, presentation slides, live graphics, and example videos that played live into the stream to better highlight the key points. It was a live webcast with multiple sources, presented, operated and delivered by me alone.

Here’s a run-down of the kit and how it was used for those of you who are looking to run something similar and engage with your audience from the comfort of your own home.

Wirecast by Telestream – The Brains

At the centre of the operation is a MacBook running the Wirecast Pro software (note, this works on both Mac and Windows). Wirecast is an incredibly powerful, fully-fledged software-based vision mixer where you can bring in multiple media sources; whether that be cameras, video files, images, graphics, even your desktop screen or remote presenters.

Whatever you want to bring into your live show, Wirecast can likely handle it.

Wirecast works in layers, the same workflow most photo and many video editing programmes use. If you don’t have much experience with those types of programmes don’t worry, it’s incredibly intuitive and quick to pick up. The layers work from bottom up: I have my live presenter camera and pre-made videos that I want to play lined up within that bottom layer. The next layer up, which is essentially overlaid on top of the bottom layer is each of my presentation slides. I can easily bring them up over my video feed as and when I want to display them to the audience. I also had a third layer on top of that for overlaying a small frame of my presenter camera on top of my slides – Picture in Picture as it’s called.

As with all the things live, preparation is key. I’d already mapped out the flow of the webinar with my supporting slide deck, then it was simply a case of making layers live as and when I needed them to be – which, when you’re presenting and running the technicalities of the show too, is surprisingly easy with Wirecast.

For the streaming side of things, it’s as simple as setting up a live session on Facebook on my computer, inputting those streaming details into the Wirecast project, and hit stream - and away you go. It’s the same process for most CDNs, including Facebook, Twitter, or YouTube etc. If you’re concerned that your computer isn’t going to have the grunt to do this sort of processing, then Telestream do offer some fantastic all-in-on turnkey solutions, do check out the Wirecast Gear range.

As a general tip, make sure that the platform you choose to stream on gives your audience the ability to ask questions, that’s really the whole point of doing these things live. With regular encouragement for questions, you can really drive user engagement – we had over 170 comments/questions during this one live session, and with the on-demand version published that’s increased to now over 250 in 24 hours.

From Camera (and Mic) to Screen

Feeding the camera and microphone outputs into the MacBook by Thunderbolt 3 was the Blackmagic Ultrastudio 4K Mini. There are numerous products that will allow you to get a video feed from a professional cine, mirrorless, or DSLR camera into your computer (such as the Blackmagic Web Presenter and ATEM Mini etc) however, the Ultrastudio 4K Mini is the I/O workhorse I tend to use most.

It’s incredibly versatile as it’s not only a 4K capture device, but also a 4K HDR playback deck – I can use this for recording/streaming high quality video into/from my computers, but also use it for driving an HDR monitor when I’m colour grading in the likes of DaVinci Resolve Studio. There’s even a full-sized professional XLR audio connection that can supply 48v phantom power, which is how I have the Azden shotgun microphone connected in this setup. Not a lot of capture cards can do this, and it essentially allows you to utilize professional grade condenser microphones.

When you’re setting up a home streaming studio, space can be limited - it is in my case anyway. I’m mindful of trying to keep my kit as streamlined as possible, and when it comes to professional studio cameras, they don’t come much smaller than the Micro Studio Camera 4K. Using this studio style camera not only means that I can capture great quality video at up to 4K UHD, but also means I can have remote control and power it from a mains power supply. 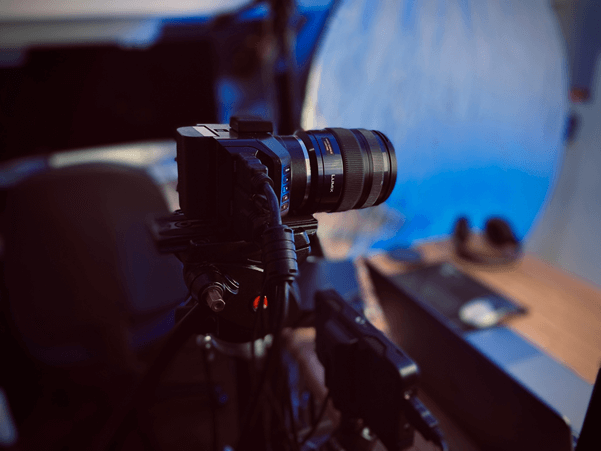 Once it’s setup, I can just leave it be and control everything from the desk I’m presenting at. Having it mains powered is key - last thing you want when you’re live is your camera battery going dead.

The Panasonic Lumix 12-35mm f/2.8 lens was used for this webinar – it’s the lens I tend to favour using the most for Micro Four Third mount cameras (such as the Blackmagic Pocket Cinema Camera 4K and the Lumix GH5S) due to a combination of flexibility with its zoom range that has a constant f/2.8 throughout and great optical quality.

Azden flagship broadcast 3500L microphone is the hyper cardioid version of the 3500 (which is super cardioid), so it’s a much more directional microphone. It’s ideal if your filming environment isn’t the quietest, as it rejects a lot of the surrounding and ambient sound. It’s akin to the Sennheiser 416, anyone who knows anything about microphones will appreciate the prestige and reputation that microphone has – for me, the Azden 3500L is a worthy match, and it’s half the price.

The 3500L is likely overkill for a live stream on Facebook that’s going to be so audibly compressed, so if your budget doesn’t allow for it, Azden do a whole host of more affordable, yet still good quality microphones that will fit the bill. For me however, this microphone is now my one stop shop for capturing great audio for both live streaming and creative filmmaking. 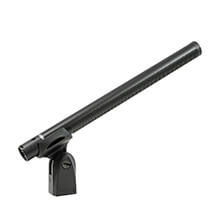 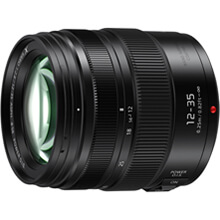