Where to buy Videos Product Firmware

Today's software has evolved to become the most complete, dynamic and feature-rich software platform on the market. Its video editing, audio editing, compositing and colouring tools combine to deliver an unrivalled workspace.

Now used on the biggest blockbuster films and countless YouTube channels, DaVinci Resolve's user base is growing at a breathless rate.

Priced to appeal to all and designed to support both fast turnaround and long form projects, DaVinci Resolve is an awesome piece of technology.

DaVinci Resolve’s incredibly wide format support makes it compatible with virtually every modern file format and media type in the world. Many post production houses use DaVinci Resolve for all their transcoding requirements.

As well as being able to render out to popular deliverable formats such as H.264, ProRes and DNxHD, DaVinci Resolve Studio can also deliver to high end formats that other systems at this price point are not capable of. Formats such as DCP for cinema delivery, and IMF for Netflix and 20th Century Fox delivery, are built into the Deliver Page.

DaVinci Resolve's new Cut Page gives editors the ability to cut quickly and directly export out. If needed, with a single click they can move to the Edit Page to fine tune the edit. Competitive systems have either a fast editor, a complex editor, or a separate application where round tripping is needed, making the workflow more complex.

The unique collaborative workflow allows users to work on the same project at the same time. Using a PostgreSQL database, separate users can edit, grade, mix audio and create VFX while the project will update all changes for all users. In addition, colourists can remote grade, signing into a machine in another location while working with their local machine.

DaVinci Resolve enables users to mix and master projects in immersive 3D audio formats such as Dolby Atmos, Auro 3 D, SMPTE ST 2098 and the new 26 channel super bus. It features support for loudness monitoring standards such as ATSC, 1770 and R128.

The Fusion tab in DaVinci Resolve opens a node-based interface and true 3D workspace allowing users to composite images on top of each other to create sophisticated effects. Nodes are connected together in a flow chart style, making it easy to see the entire composition and quickly make changes. Working with nodes in Fusion is much faster than hunting through stacks of layers and filters.

Fusion features multiple keyers, paint tools and bezier and B-spline tools to draw, track and animate custom shapes and isolate actors or objects from other elements in a shot. Fusion can create, manipulate and animate text and objects at the keyframe level. Its toolset is massive, powerful and growing fast, to give users to control every element of their motion graphics canvas. 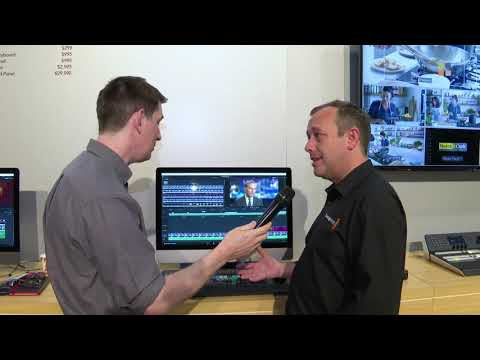