Lenses for stills photography are described in terms of focal length and F-Stops. The smaller the F-Stop number, the bigger the aperture of the lens and so more light gets to the camera’s sensor. As well as more light reaching the sensor, a large aperture (small F Stop) also gives a shallower depth of field which creates defocused backgrounds which have always been popular in portrait photography.

Lenses for stills photography are described in terms of focal length and F-Stops. The smaller the F-Stop number, the bigger the aperture of the lens and so more light gets to the camera’s sensor. As well as more light reaching the sensor, a large aperture (small F Stop) also gives a shallower depth of field which creates defocused backgrounds which have always been popular in portrait photography.

The effect of this narrow depth of field is literally to draw the attention of the viewer towards the focused area, making it a favourite tool for story telling in drama and film production. Other genres such as music videos, wedding videos and art films also use a shallow depth of field extensively for creative purposes.

Lenses with larger apertures are also known as ‘fast’ lenses because they let in more light, letting a photographer use faster shutter speeds.

Most lenses designed for video and film use, such as the Zeiss, SLR Magic and Cooke range are quoted in T, rather than F-Stops.

F-Stops are calculated purely by geometry, giving a theoretical maximum speed for a lens. However, this way of measuring the properties of a lens does not account for a number of factors that change the way light passes through. You see, all lenses are not the same. The better the glass, the design, the coatings and the construction, the more light actually passes through it.

T-Stops (Transmission Stops) are a much more accurate gauge of how much light is actually transmitted through the lens and arrives at the sensor. A poorly conceived lens can lose ¾ or more of a stop of light, making the F-Stop label misleading in the real world.

All lenses lose some light. If you measured the excellent Panasonic Lumix 12-35 f/2.8 lens based on how much light actually gets through, it is not actually a F2.8 but a F3.1 - ½ a stop ‘slower’ than a 2.8. In terms of depth of field nothing changes, but less light actually makes it through the lens.

So in T-Stop terms, SLR Magic lenses would give even better low light performance the equivalent lens quoted with F-Stops. The SLR Magic HyperPrime CINE III 25mm T0.95 will deliver more light to the sensor than a F0.95 lens. 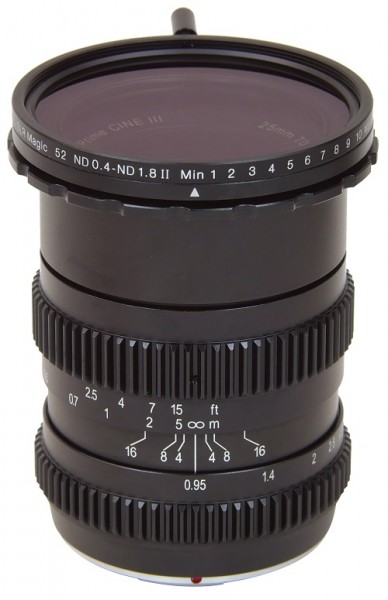 Also all the SLR Magic lenses have ‘click-less’ aperture, which simply means they don’t click into exact F-Stops so you can subtly change the aperture without the image getting darker in steps like it can with photographic lens. This smooth action is also less likely to cause any camera shake, an important consideration whether you are filming on a support or handheld.

The design of SLR Magic lenses makes it straightforward to use on a rig. Because they already come with a metal gear ring around the focus barrel, they can be used with a follow focus which is geared to make focusing easier and more subtle).

One last thing, if you want to shoot video with shallow depth of field on a sunny day, you might have a problem. Your stills photographer friend can just use a faster shutter speed so less light hits the sensor in a frame and so he may be OK, but if you shoot video with a really fast shutter the video looks like the highly stylized beach landing scene in Saving Private Ryan.

Cameras like the Blackmagic Ursa and the Panasonic GH4R don’t have a built-in Neutral Density (ND) filter to darken the image. So to get round this problem many people use a special filter called a ‘Variable Neutral Density Filter’ on the lens. These are a great idea and are popular with camera operators, although many variable ND filters have been found wanting, with intrusive vignetting or an ugly colour shift.

Luckily SLR Magic have a range of excellent Variable ND filters which work perfectly with their lenses and other manufacturers’ lenses too. There are even bundles with their lenses. They also block Infra-Red light, which is vital as many cameras are sensitive to Infra-Red which can screw up the colour of a shot. When shooting with other Variable ND filters a green tree might even end up looking red.

Go Cable-Free with the Spark 4K