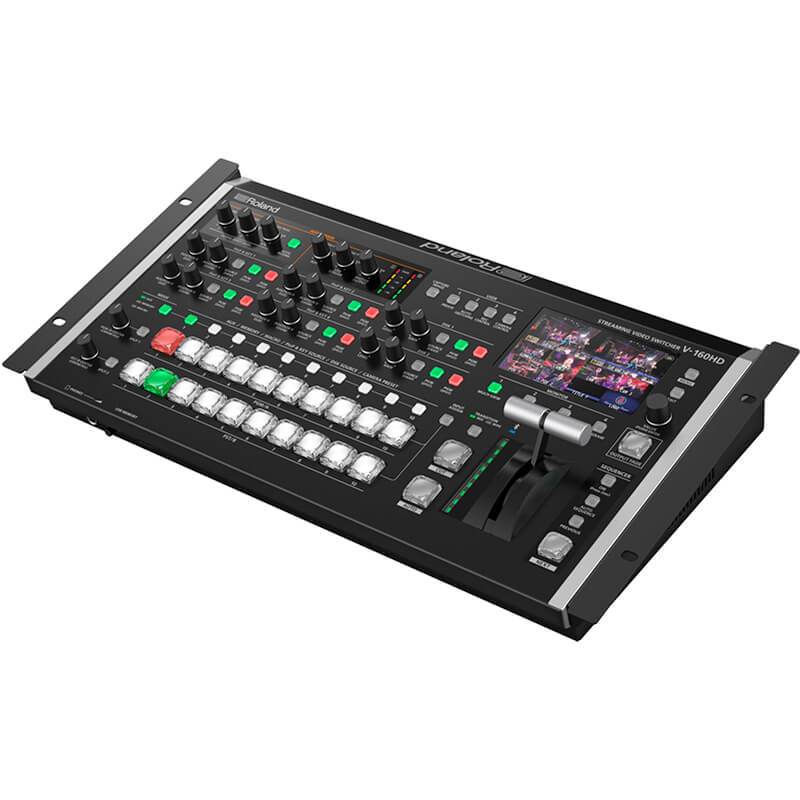 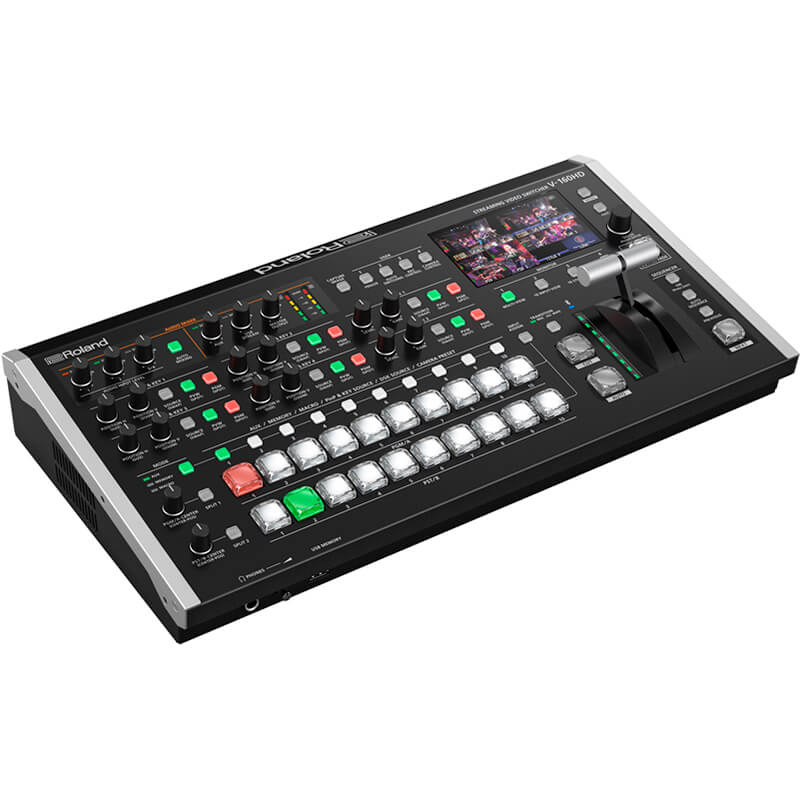 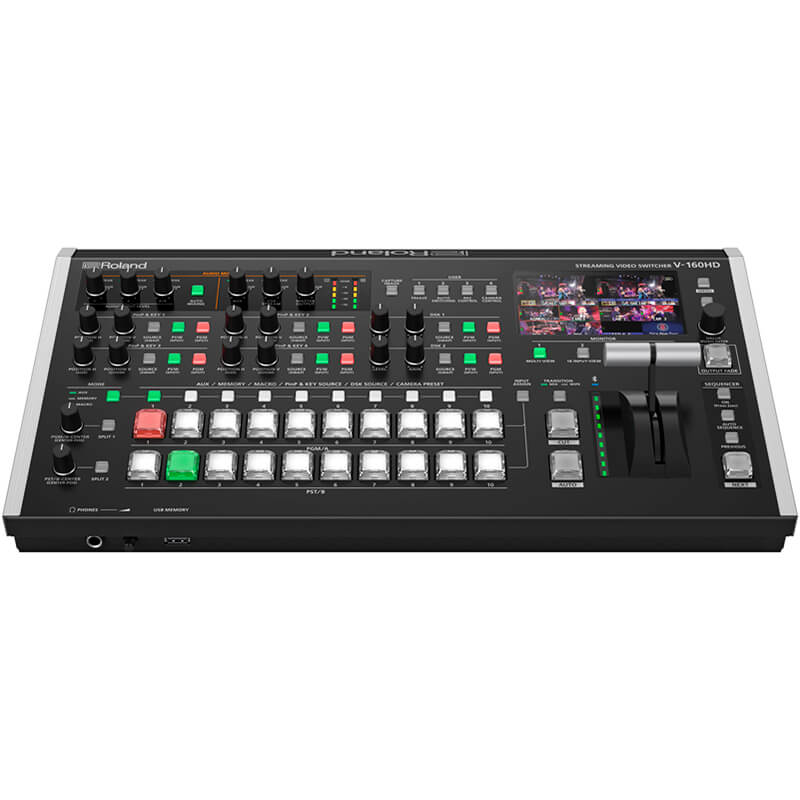 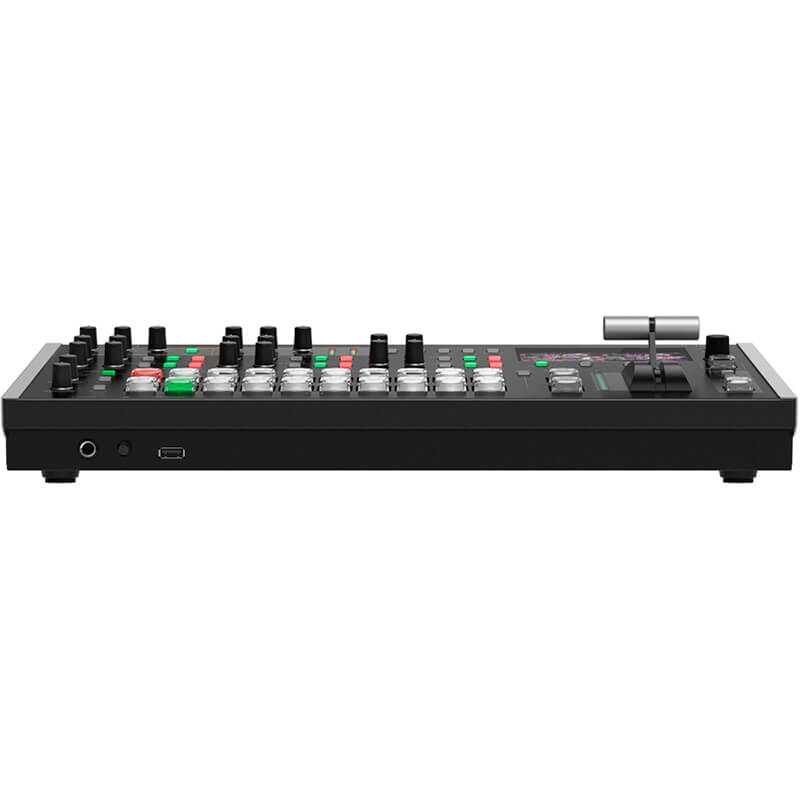 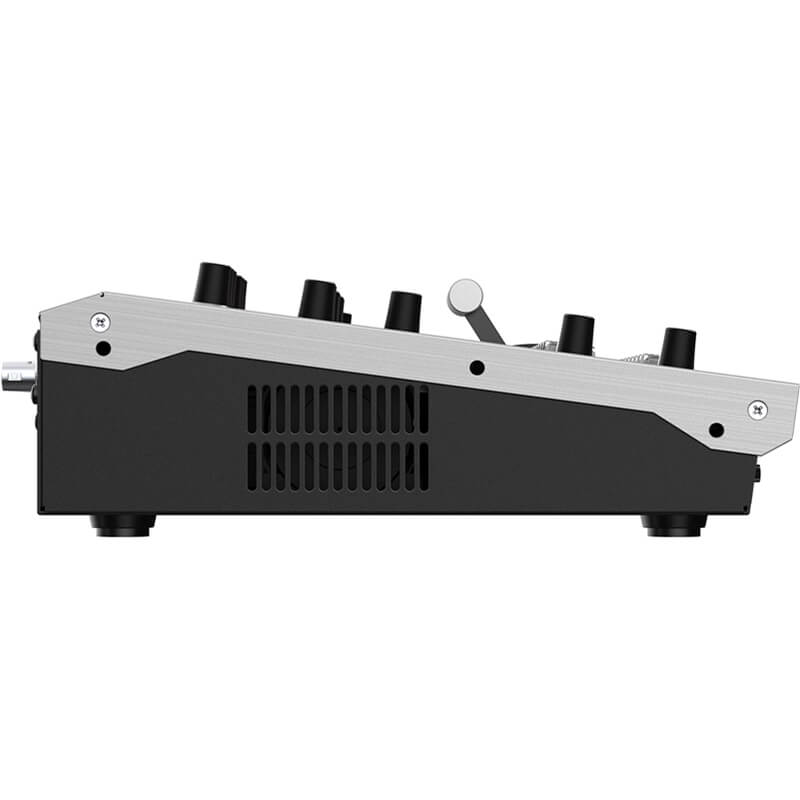 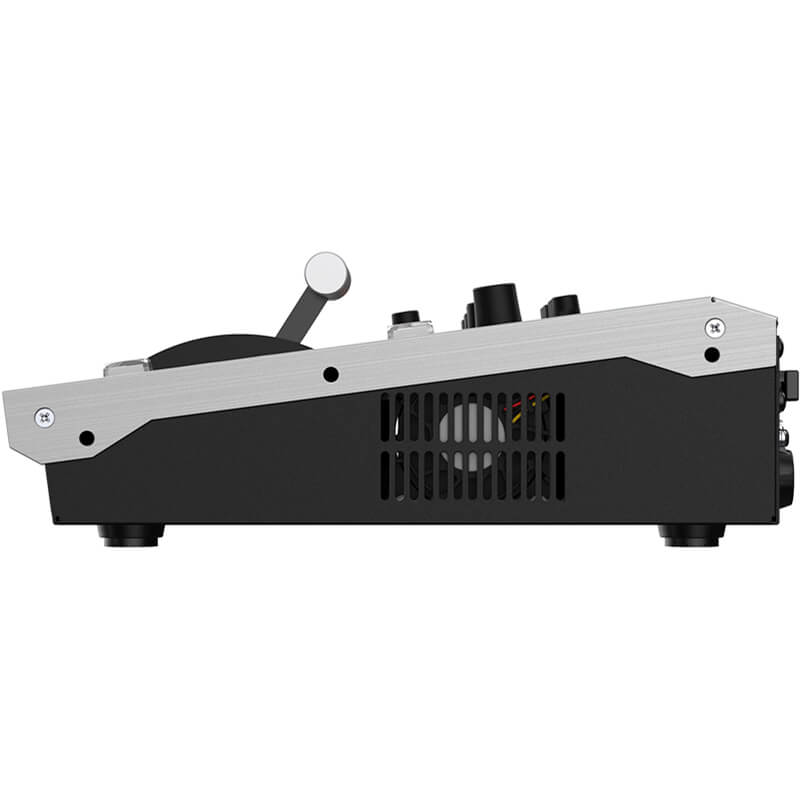 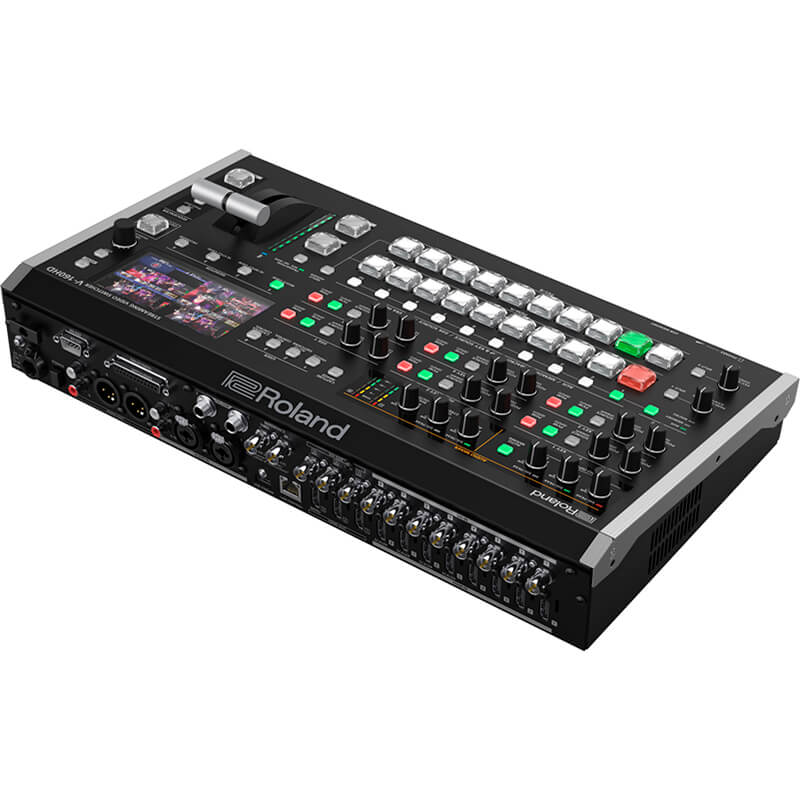 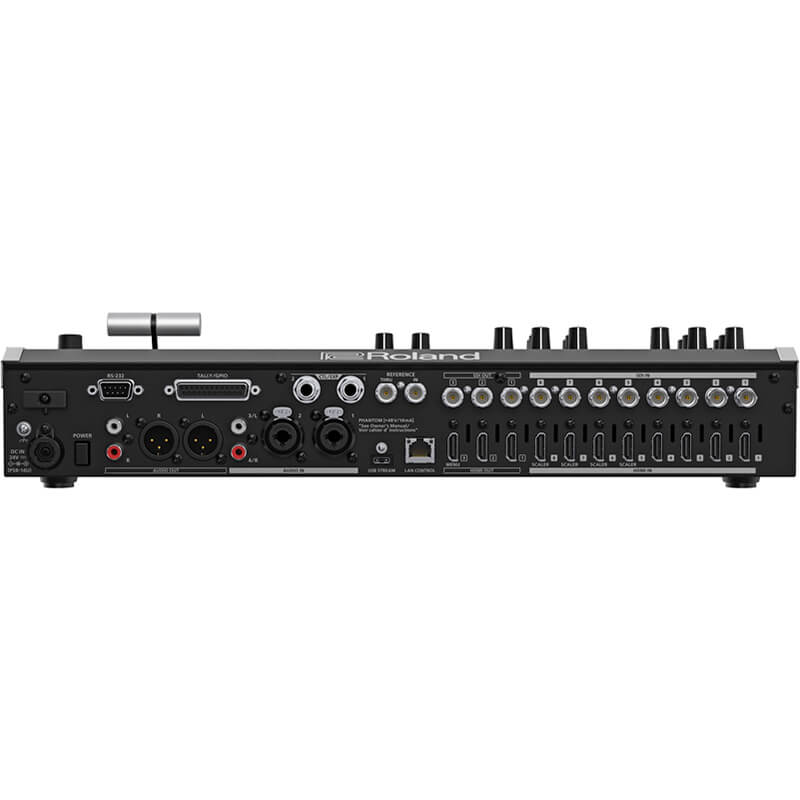 Filled with pro features to take on any modern production, the V-160HD sets a new standard in hybrid event switching. Connect with live audiences in Full HD with comprehensive SDI and HDMI I/O and simultaneously stream to any popular web platform via USB-C. There’s also an eight-layer video effects engine, a 40-channel digital audio mixer, and integrated PTZ camera control, plus next-generation cue management and live show automation features that make tough production tasks simple. And everything’s all wrapped up in a portable design with a broadcast-style interface that’s easily handled by a single operator.

Hybrid to the Max

The V-160HD combines the robust hardware needed to flawlessly execute live productions with the livestreaming capabilities found in computer-based systems. While software workflows are fine for online-only events, the V-160HD delivers the pro essentials you need for both the in-person and streaming components of a live hybrid event, complete with the ability to tailor the content for each audience.

The V-160HD supports HDMI for common A/V devices plus SDI for long cable runs and high-end cameras. Seamlessly mix eight HDMI sources and eight SDI sources in Full HD, even with mismatched frame rates and colour spaces. And with built-in scalers on four of the HDMI inputs, you can easily interface with client-provided sources like computers, tablets, smartphones, gaming consoles, and legacy 4:3 devices.

With seven freely assignable outputs—including three SDI, three HDMI, and one USB-C streaming—the V-160HD puts a high-end video matrix at your command. Feed program displays, auxiliary monitors, multi-view producer displays, and the online audience at once, complete with a “clean” output left over for a recording feed.

Storing and recalling custom looks can be accomplished with just a few button presses on the V-160HD.

Our free remote control software for macOS, Windows, and iPad further enhances this workflow, providing a large graphical interface for setting up and previewing actions before you take them live.

The V-160HD’s newly developed sequencer makes presets and macros even more powerful, allowing a single operator to execute perfectly timed cues with ease. Up to 1000 steps can be recorded in the sequencer, and each step can include both presets and macros. Simply set up your cues ahead of time in the sequence list and trigger them in order using the Next button on the panel. With the power of the V-160HD’s sequencer, you can tackle the most complex events without ever breaking a sweat.

Video effects and graphics are must-haves to bring polish and excitement to any production. The V-160HD’s effects engine features eight composition layers that can be assigned to the Program and Sub-Program outs, so you’ll always keep audiences engaged with visually appealing content. With up to four picture-in-picture windows, downstream key layers, 16 still store slots with transparent PNG image support, and more, you can manage the creative needs of any client. For example:

The V-160HD uses the same connection technology as webcams,* allowing you to stream events at 30/60 FPS in Full HD** and reach a worldwide audience. Simply connect the USB-C output to a computer and start streaming with Zoom, Microsoft Teams, YouTube, Facebook Live, or any platform that can use a webcam as its source. Everything is plug and play, with no driver installation needed.
*USB video class (UVC) and USB audio class (UAC) compliant.
**YUV2 (uncompressed) and Motion JPEG (compressed) formats supported.

Offering studio-grade sound, the V-160HD’s 40-channel digital audio mixer lets you blend signals from all 16 video inputs, USB-C, and microphones and line-level devices connected to the two balanced XLR combo and stereo RCA inputs. And with the convenience of onboard Bluetooth, it’s possible to wirelessly stream music and other sound sources from a phone or tablet as well. There’s also an extensive effects library for polishing sounds and quickly resolving common issues like audio synchronization and background noise removal.

Robotic PTZ (pan-tilt-zoom) cameras eliminate the need for multiple camera operators, provide great production coverage with studio-grade broadcast quality, and can be placed in discreet locations thanks to their small size. The V-160HD includes built-in support to directly control select Canon, JVC, Panasonic, Sony, PTZOptics, Avonic, and VISCA-compatible PTZ LAN cameras. Mix and match different brands as you like, and operate up to 16 PTZ cameras simultaneously. 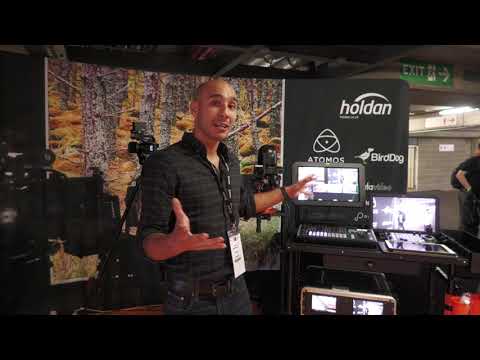 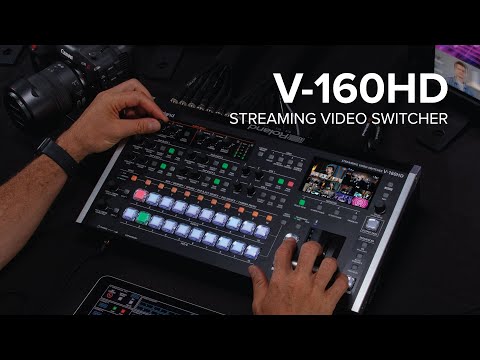