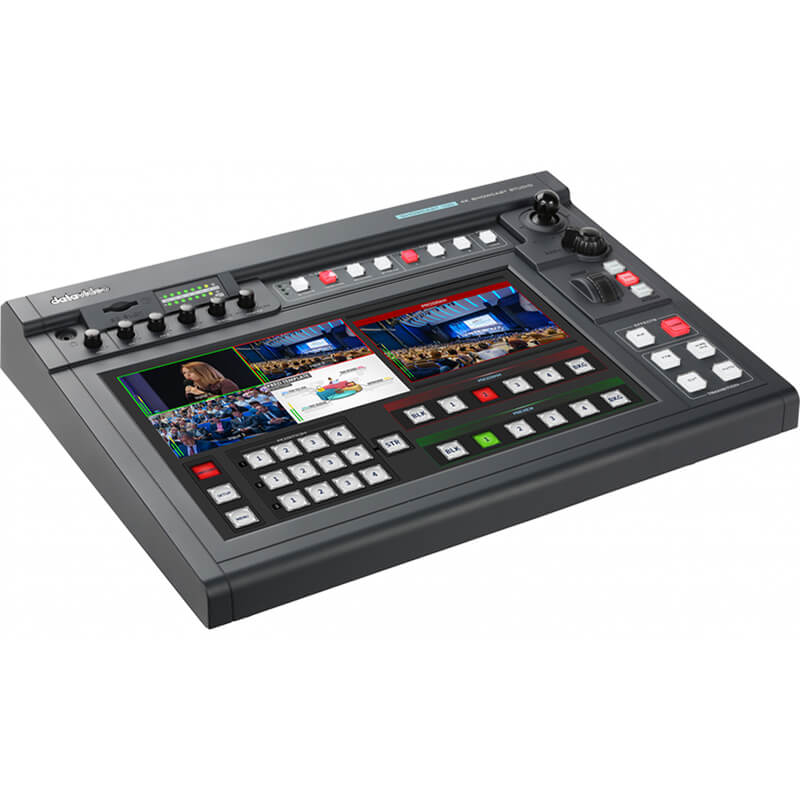 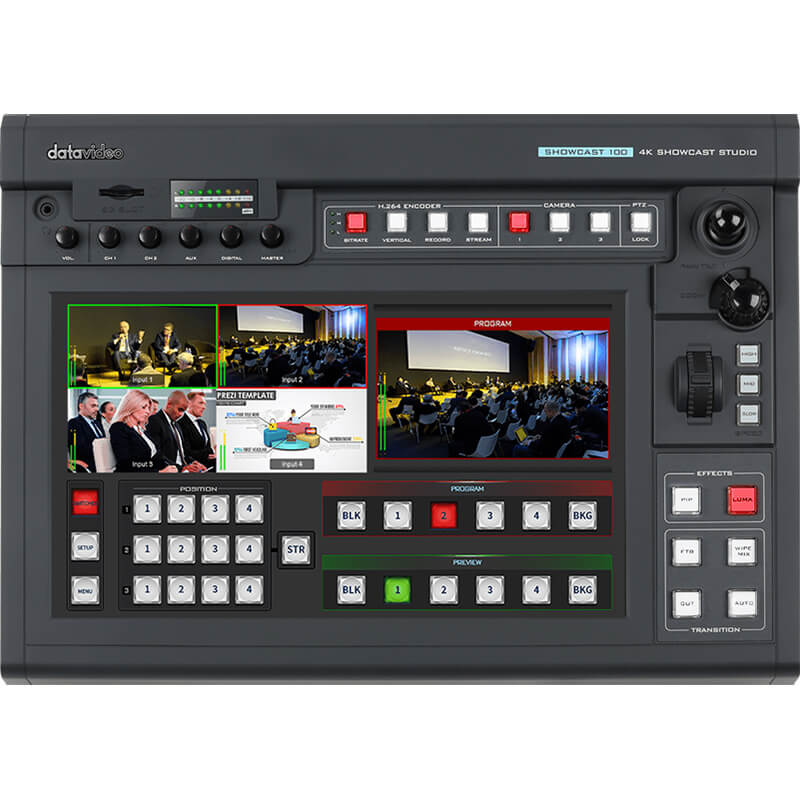 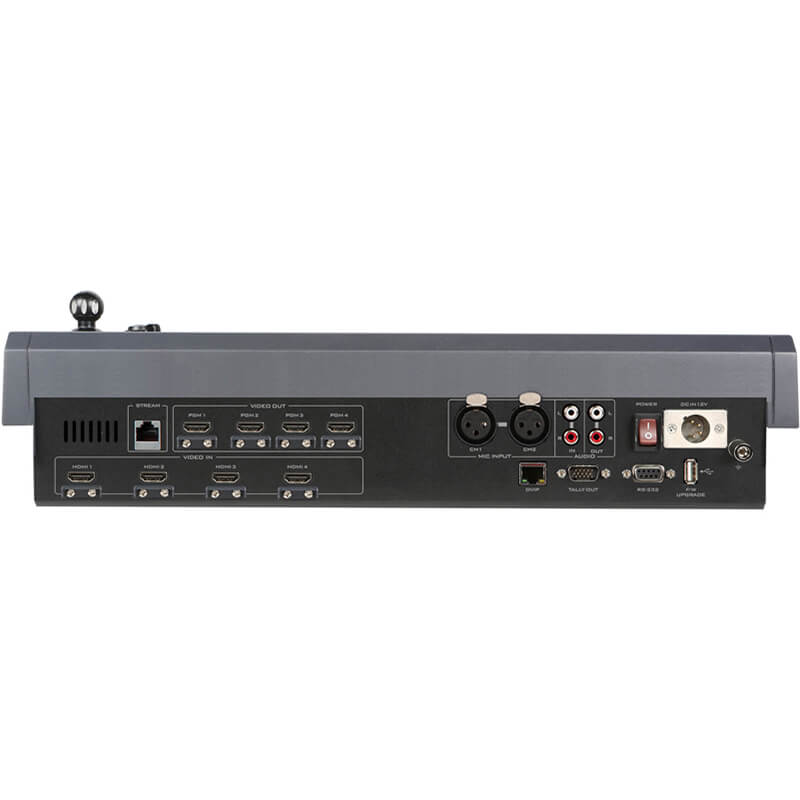 Innovative, Compact, Easy to use and All-in-one.

The ShowCast 100 is a brand new 4K 4-Channel Touch Panel Switcher that features 7 major functions. It can switch video, overlay text and graphics, control cameras, live stream, record, and mix audio all from a single unit. Similar to a tablet, the 14-inch touch panel allows easy and intuitive access to switcher functions.

The touch panel allows easy and intuitive access to a variety of switcher functions. The Showcast 100 has many functions with easy setup.

The unique all-in-one design streamline your video production workflow by reducing the number of external devices that you need to connect. Showcast100 is light and compact. Its mobility makes it ideal for any live production environment.

The ShowCast 100's built-in camera control functions allow you to simultaneously control three PTZ cameras. You can directly save the lens position presets, pan and tilt positions in real time and zoom in and out of a shot. In addition, you can adjust the white balance, iris and mirror mode of each camera.

The built-in dual live streaming encoder allows you to record and stream simultaneously. With the ShowCast 100's recording capability, you can easily back up the recorded video files for post production edits without much effort.

Virtual buttons on the large touch screen panel makes it easy for operating the switcher as well as setting up presets for cameras.

Operating the ShowCast 100 is as easy as using a tablet. Produce professional video productions without having a huge learning curve on how to use and operate a switcher.

Cut, Mix and Wipe are the three useful and simple transition effects built into the switcher. Via an easy-to-use 14 inch touchscreen UI, the transition settings will be immediately accessible after selection of a particular effect. For example, if you've selected WIPE, you can easily adjust the transition speed by dragging a slider with your finger or tap to select a colour for the border.

PIP is often required in video production. Most of the time, the PIP window size need to be adjusted for the program view. The ShowCast 100 allows you to drag different sliders on the touchscreen UI with your finger to set the aspect ratio of the PIP window. The split window is usually used for live interview, corporate presentations, and panel discussions.

Even though ShowCast 100 can control only three PTZ cameras, you can save up to four presets per camera, giving you a total of 12 different angles for your production. The 12 memory presets allow the director to instantaneously switch between different camera angles on ShowCast 100 by pushing corresponding preset buttons.

On the intuitive touchscreen UI, you can easily adjust the camera's focus, iris and white balance settings. Settings of a particular program can be saved in memory presets for future use.

The ShowCast 100 offers two ways to overlay subtitles. A lumakeyed subtitle is usually used for logos, animated texts, etc. Lumakeyed subtitles can be previewed on the multiview screen and transitioned to program.

Luma key is an image processing technique that deals with the brightness level of an image or a video, thereby generating a foreground subtitle or logo. ShowCast 100's luma key function is designed for logos, text and animated images.

The CG texts or image generated using the network streaming server can be overlaid on the video during streaming. The text size and colour can be customized with a border added. The text or image position can also be adjusted accordingly.

The built-in dual live streaming encoder allows you to record and stream simultaneously. With the ShowCast 100's recording capability, you can easily back up the recorded video files for post production edits without much effort.

Depending on the bandwidth, you can set the bitrate to low, medium or high. To meet growing demand for mobile viewing, the portrait view can now be easily activated on the ShowCast 100 by simply pressing the VERTICAL button so that viewers will be able to view the program on their mobile devices by holding them upright without having to change the orientation.

dvCloud is a professional live streaming platform developed by Datavideo. Once you've login, you will be allowed to create and manage all video streaming channels on dvCloud and stream your video to 25 live stream servers without any time constraints. The best part about dvCloud is that it allows you to back up video files on the cloud server for future downloads. The Showcast 100 forms a low latency, secure and reliable streaming work flow with the SRT protocol and the dvCloud server.

For each live streaming video, 50% of the audience view on mobile phones, and 94% of the mobile users prefer holding the phone upright to view the video. It takes only a few basic setups for the vertical streaming function of the Showcast 100 to generate a portrait view of your streaming video.

The traditional physical keyboard of the switcher is replaced by a professional touchscreen UI to allow video switching, activation of subtitle overlay, camera control, video recording, audio mixing, etc. Operating of these functions is intuitive and easy to learn, even to novice users.

With the ShowCast 100's recording capability, you can easily back up the recorded video files for post-edits, etc without much effort.

The 4 Channel Audio Mixer accepts embedded audio, two MIC input channels, one AUX channel and one HDMI audio channel, giving you the ability to mix the audios while processing the image.

After an absence of three years, the NAB Show is back with a rash of signature product launches. It’s probably no coincidence that the past 36 months have seen little in the way of innovation in the broadcast and professional video industry, apart from a slew of mirrorless cameras. The unstoppable force that is the engineer needs the immovable object – the trade show – to get the creative juices flowing it would seem. 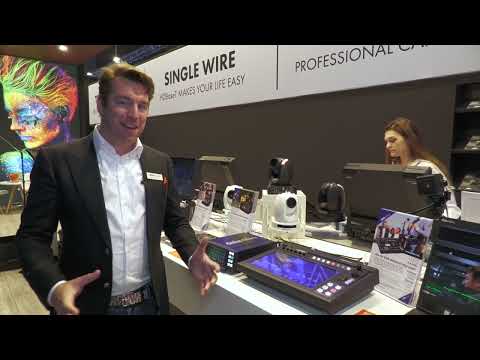