The AK-HRP200 remote operation panel (also called paintbox) offers extensive camera control over serial or IP connections, and SD card memory for easier setup and systems management. With this free version 2.0 firmware upgrade, the HRP200 can also adjust such popular cameras as the AW-HE120, AK-HC1500 (serial only) and many others. Remote lens control of these and other cameras is also available from the HRP200. 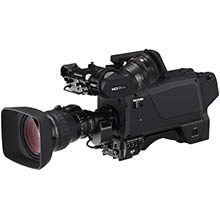