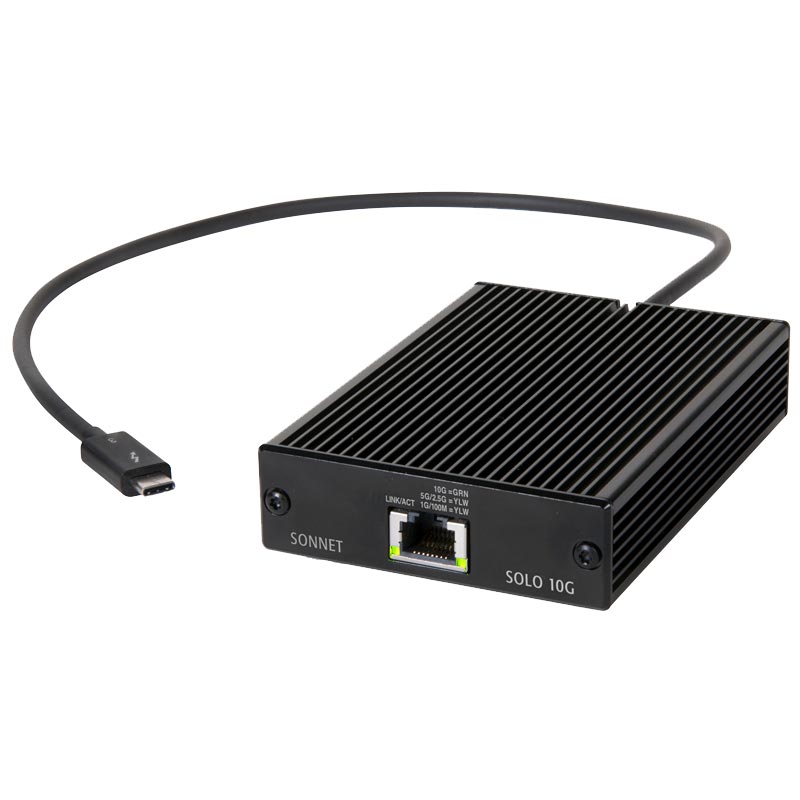 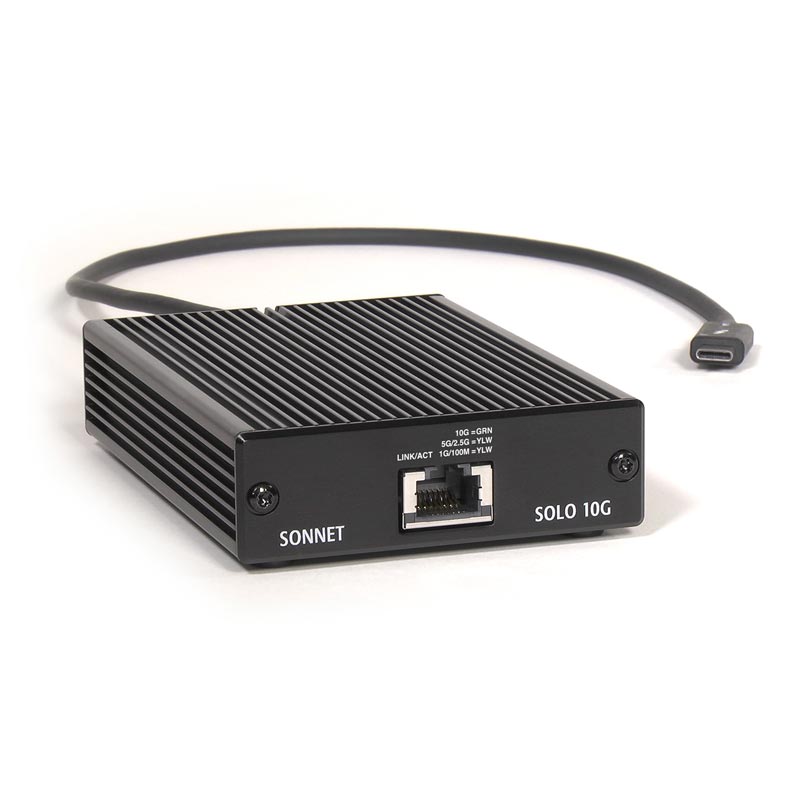 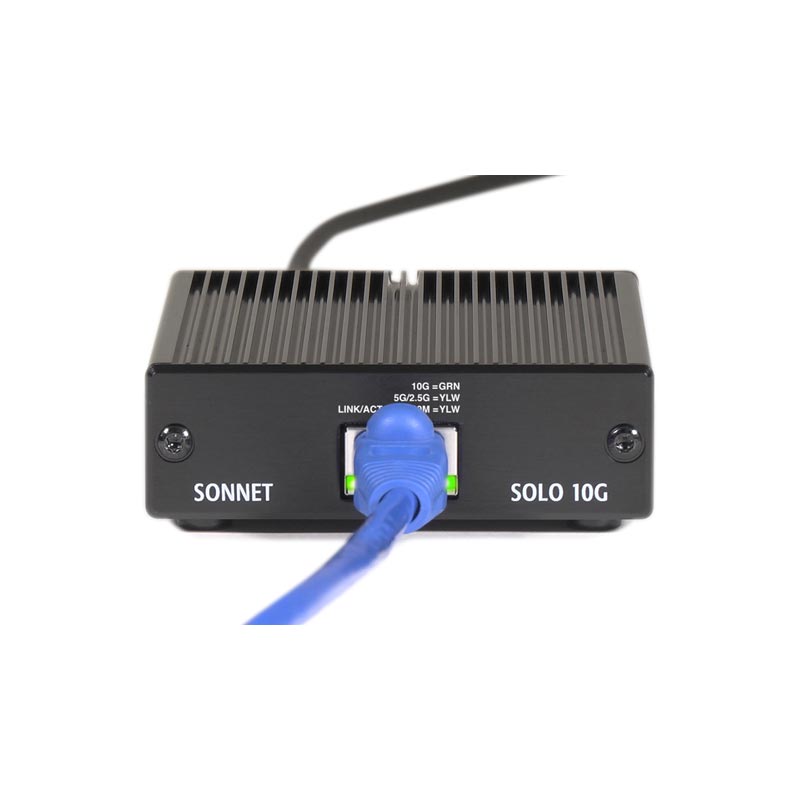 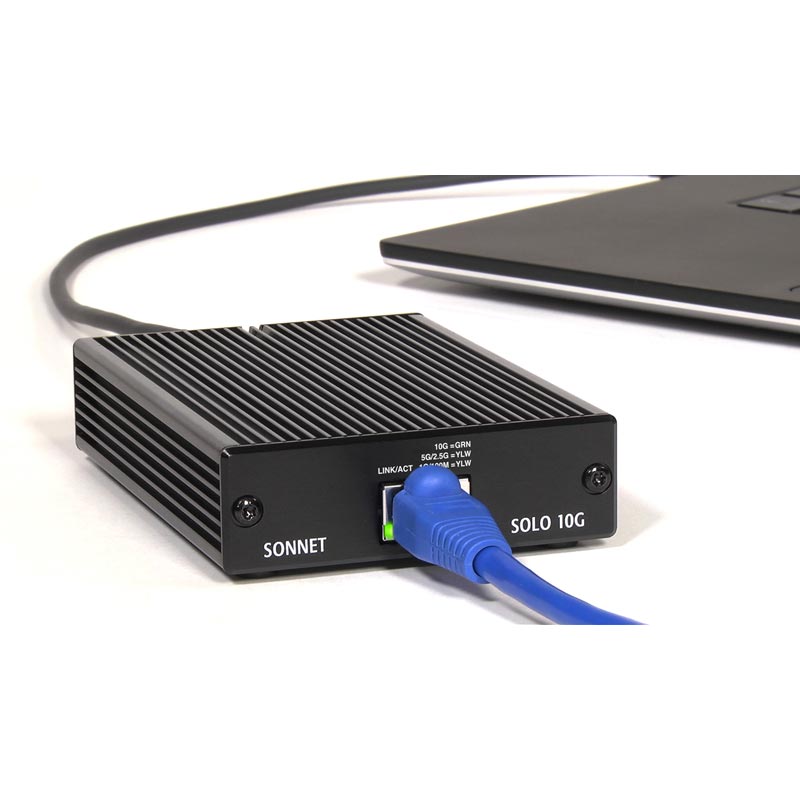 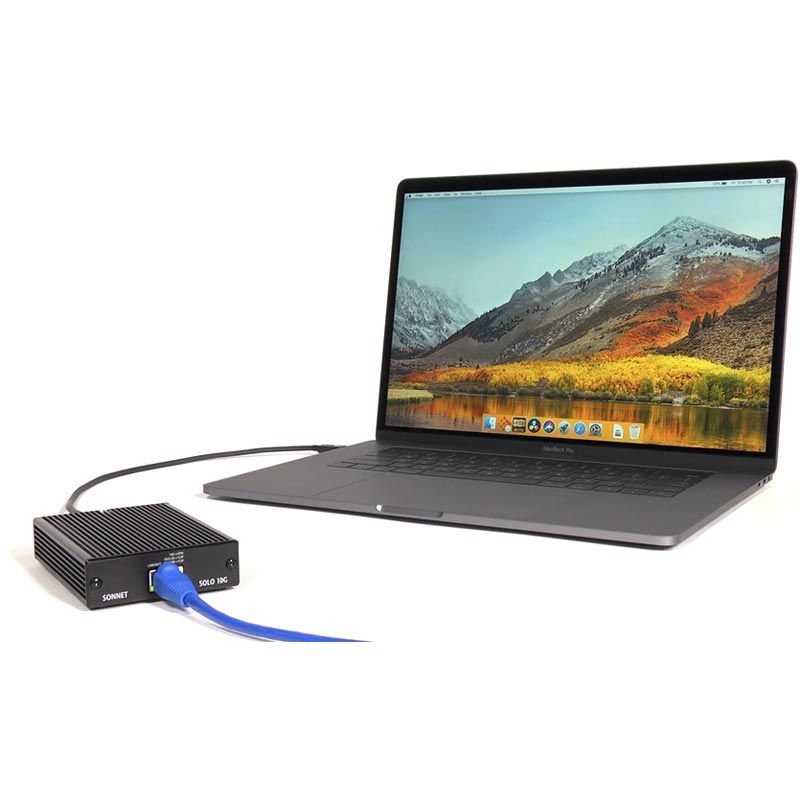 In recent years content creation and output have quickly moved from HD to 4K and beyond, making 10Gb Ethernet the new data transfer standard for post-production shared storage workgroups and other bandwidth intensive workflows. Very affordable 10Gb Ethernet Switches with RJ45 (copper) have significantly reduced the cost of setting up a 10GbE infrastructure, resulting in very rapid adoption. Even the new iMac Pro™ includes 10Gb Ethernet as its standard network interface. Now, for computers with a Thunderbolt™ 3 port, there is an equally affordable Thunderbolt to 10Gb Ethernet adapter—Sonnet’s Solo 10G™ Thunderbolt 3 Edition adapter, a powerfully simple solution for adding blazing-fast 10GBASE-T 10GbE network connectivity to any Mac® or Windows®(1) computer with Thunderbolt 3 ports.

The Solo 10G adapter is equipped with a single RJ45 socket, enabling it to connect to 10GbE infrastructure via inexpensive CAT 6 or CAT 6A copper cabling at distances up to 55 or 100 meters, respectively. Oh, and it’s priced at a level that seemed impossible even a year ago.

Does your facility have CAT 5e wiring installed already? You can still get a great performance gain—from 250 to 500 percent over Gigabit Ethernet speed—without rewiring! The Solo 10G adapter also supports the NBASE-T™ industry-standard of 2.5G/5G link speeds, which enables greater than Gigabit Ethernet speeds over CAT 5e cabling when used with an NBASE-T compatible switch or router. This capability allows you to deploy the same adapter across an organization for users supported by different Ethernet cabling infrastructures.

Audio Video Bridging (IEEE 802.1Qav, AVB) support makes the adapter perfect for use in pro audio and video applications where synchronization of data streams is critical.(2)

Through the use of a captive cable, the Solo 10G adapter’s Thunderbolt connector remains firmly connected to it at all times. Should the cable ever break, it can easily be replaced with an approved replacement cable available from Sonnet or a Sonnet-authorized reseller.

As a networked conduit into your computer, the Sonnet Solo 10G was designed with essential security features. Incorporating encryption in hardware, the Sonnet adapter is protected against malicious modification of its firmware. Any unauthorized attempt at firmware modification to facilitate surreptitious computer access would render the adapter inoperable. This secure design prevents the Solo 10G adapter firmware from being reprogrammed except by a manufacturer’s update using a secure encryption key.

Unlike the vast majority of 10GbE adapters, the Solo 10G is pocketable—measuring a mere 3.1 inches wide by 4.5 inches deep by 1.1 inches tall—and bus-powered to enable truly portable use without a power adapter. Due to the use of the latest technologies wrapped in a rugged aluminum case, Sonnet designed a cool-running adapter that doesn’t need a fan, allowing silent and energy-efficient operation.

How simple? Connect the Solo 10G adapter to your computer, connect the adapter to the network switch or directly to 10GbE-enabled storage, and configure the adapter’s settings through the macOS® Network control panel or Windows Device Manager. 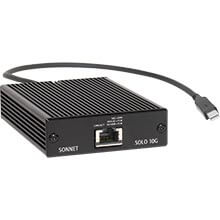 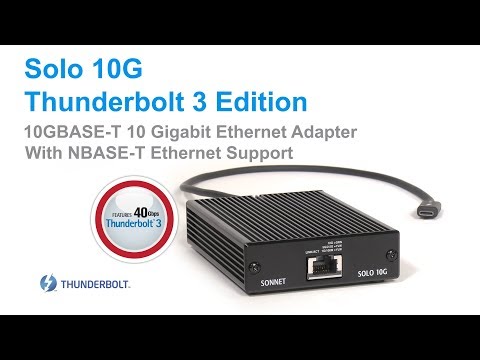 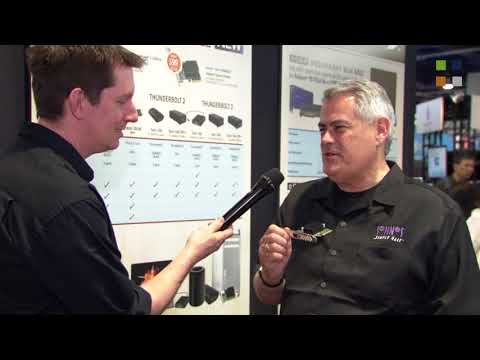 New 10g Ethernet to Thunderbolt adaptor from Sonnet at NAB2018