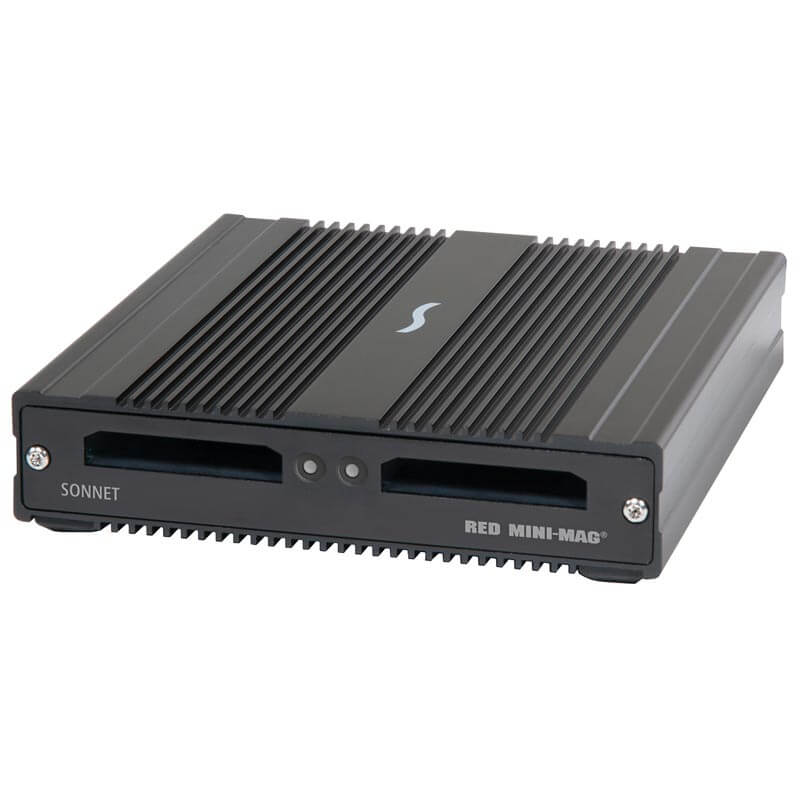 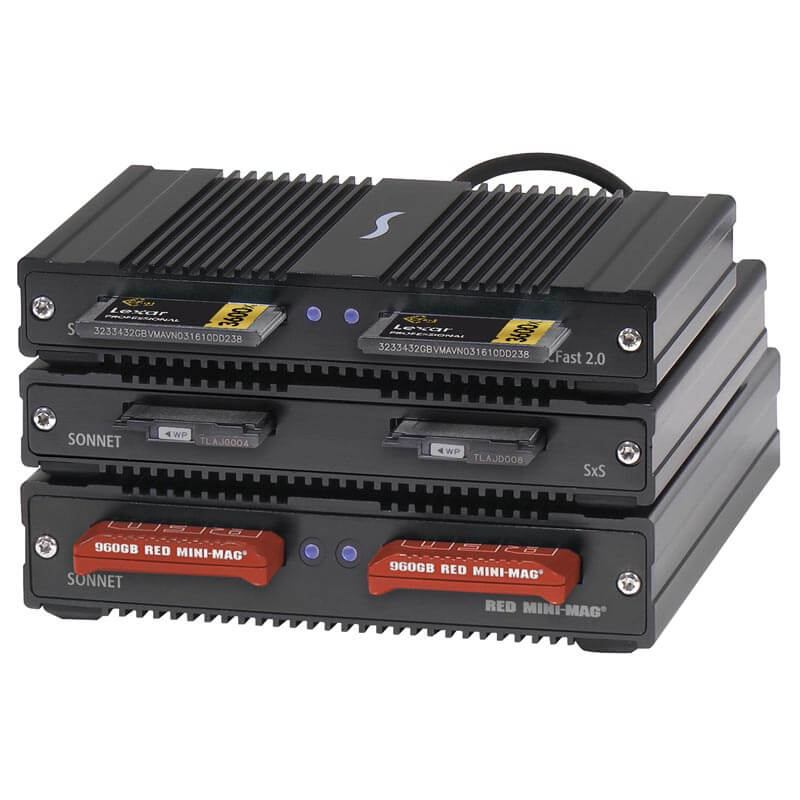 When you shoot on RED, chances are your footage is captured to RED MINI-MAG® media, known for their quality and durability. With the move to shooting in 8K and at high frame rates, those cards fill up faster than ever—the need for a tool that accelerates offloading footage from multiple cards is greater than ever, too. The Sonnet SF3™ Series - RED MINI-MAG Pro Card Reader is the ultimate tool for the job.

RED Approved LogoFeaturing a dual-port, 40Gbps Thunderbolt™ 3 interface, this RED APPROVED reader ingests footage from RED MINI-MAG memory cards to any Mac®, Windows®, or Linux® computer with Thunderbolt 3 ports—on location, in the studio, or in the edit suite—at the fastest speeds the cards will support.

The SF3 Series - RED MINI-MAG Pro Card Reader can ingest files simultaneously from two cards at up to 1060 MB/s—more than double the average ingest speed of other RED MINI-MAG card readers—to cut your ingest times in half.

The ability to ingest multiple cards simultaneously means you can complete the process—without swapping cards—in as little as one sixth the time required using a single-slot reader!

Built with rugged aluminium enclosures, SF3 Series card readers are designed to be stacked and daisy chained, enabling you to connect up to six RED MINI-MAG readers to your computer through a single cable. Now you can take advantage of Thunderbolt 3’s 2750 MB/s bandwidth to ingest four, six or more cards simultaneously!

Measuring 5.75 inches wide by 1.4 inches high by 6.1 inches deep, the SF3 Series - RED MINI-MAG Pro Card Reader is suitable for use in any workflow and workspace; for DITs working multi-camera shoots or in a small space, the Sonnet reader’s design advantages stand out. Built with rugged aluminium enclosures, SF3 Series card readers are designed to be stacked and daisy chained, enabling multiple RED MINI-MAG, SxS, and CFast 2.0 readers to occupy the same footprint, while connecting to your computer through a single cable. Now you can take advantage of Thunderbolt 3’s 2,750 MB/s bandwidth to ingest four, six or more cards simultaneously!

Sonnet’s SF3 Series pro card readers include threaded mount points that enable you to securely attach two readers side-by-side on a rack tray in just 1U of rack space.

Thunderbolt 3 — The USB-C That Does It All

Thunderbolt 3 Cable and ThunderLok 3The SF3 Series - RED MINI-MAG Pro Card Reader features two Thunderbolt 3 ports; the first one used for connecting to your computer, while the second supports daisy chaining of up to five additional Thunderbolt peripheral devicesto a single port on your computer. The reader includes 10Gbps USB 3.1 Gen 2 support, meaning you can connect a USB device to the second port using the proper cable or adapter. The Sonnet reader also provides full support for connecting up to two 4K displays @ 60Hz or one 5K display @ 60Hz(1). For connected devices requiring extra power, 15 watts is provided to bus-powered Thunderbolt 3 peripherals, such as the SF3 Series - CFast 2.0 Pro Card Reader. 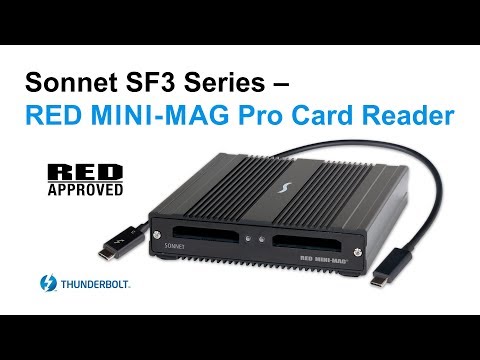 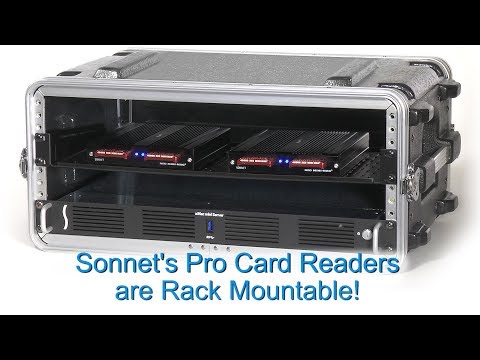