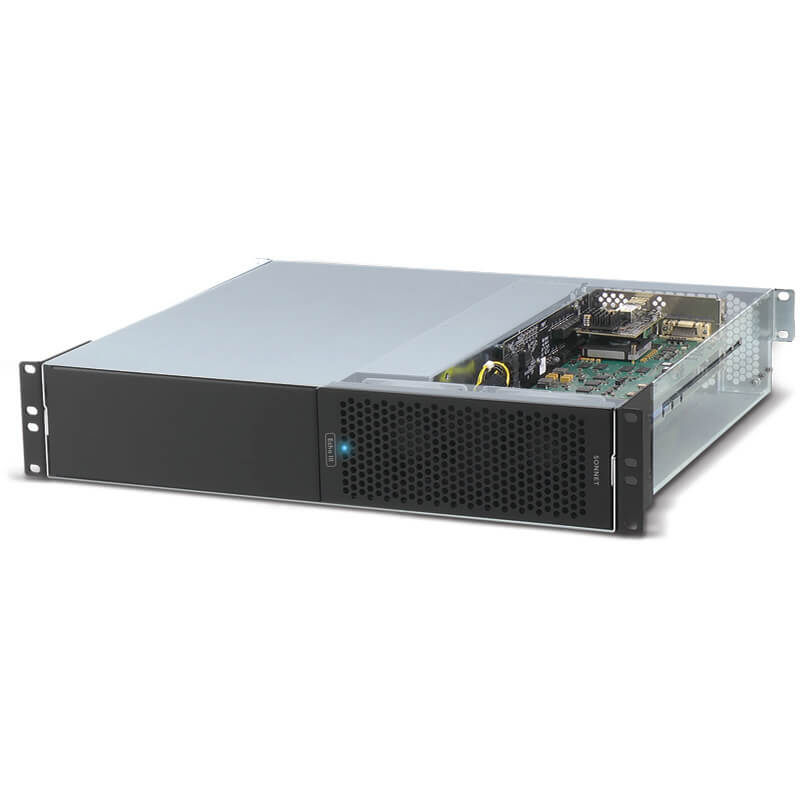 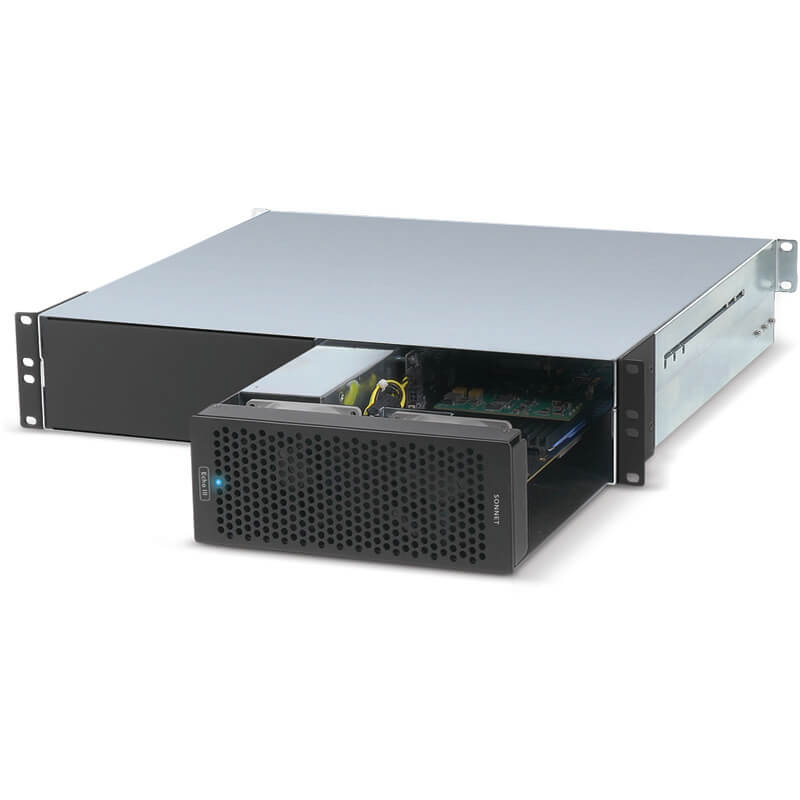 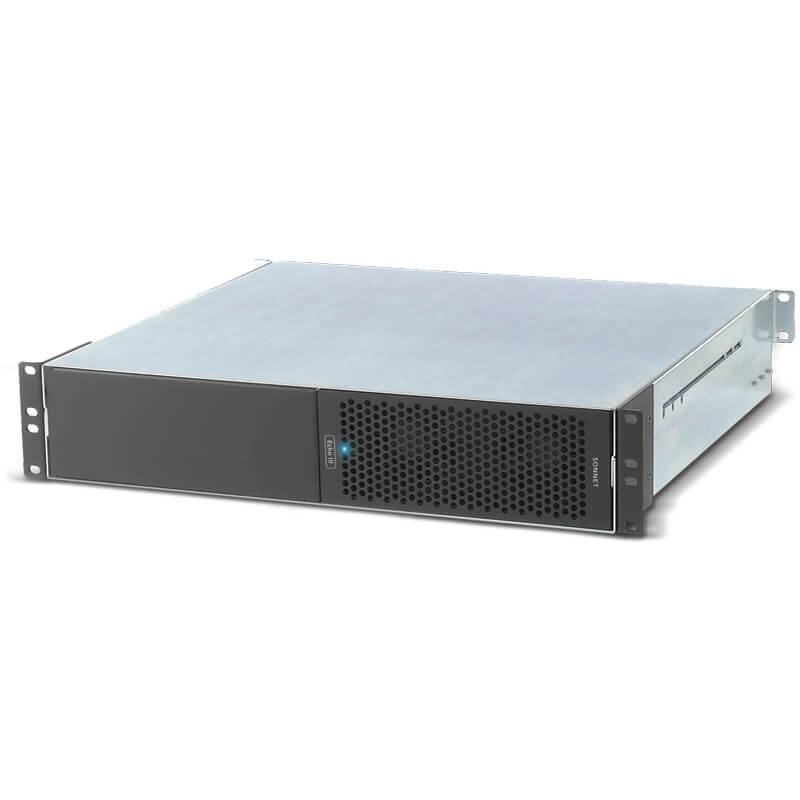 The best portable, mini desktop and all-in-one computers feature powerful CPUs and include high-performance Thunderbolt™ ports to support peripherals. But they lack the PCIe expansion slots creative pros need to install specialty adapter cards that enable their workflows by adding video and audio inputs, transcoding data, and connecting to high-speed shared storage and networks. Sonnet has a solution—the Echo™ III Rackmount—a professional Thunderbolt™ 3 to PCIe card expansion system that enables you to connect three (up to) full-length (12.28 inches long) PCIe cards to your computer at the same time, via a single cable.

Plugged into one of your computer’s Thunderbolt 3 ports, the Echo III Rackmount system delivers 2750 MB/s of PCIe bandwidth and enables you to connect professional PCIe cards (three full-height, single-width cards, or one double-width card plus one single-width card).

At the flick of a switch, the Avid qualified Echo III Rackmount system is instantly optimized to support up to three Pro Tools | HDX PCIe cards, with no extra parts necessary! This chassis has been tested and is qualified by Avid Audio group for use with Avid Pro Tools HD 2020 software, and Avid Pro Tools HDX and HD Native systems.

The Echo III Rackmount features one x16 and two x8 PCIe 3.0 slots(1), enabling it to support a wide variety of cards at the same time. It integrates a universal 400W power supply, plus a 75W auxiliary power connector to support especially power-hungry non-GPU cards, including the Avid Pro Tools | HDX. The Echo III was designed without a power switch, because it powers on and off automatically with the connected computer, saving energy in the long run. With no power switch, you can’t forget to turn off the system!

The Echo III Rackmount mounts in a rack space 2U tall, and is only 16.5 inches deep, making it ideal for use in a wide range of popular mobile racks, carts, and rack cases, and in server rooms as well. Its enclosure is formed of heavy-duty steel to provide secure mounting for the inner assembly and protection for the PCIe cards installed inside, and to support maximum airflow for cooling, regardless of where you install it in a rack.

The Echo III Rackmount’s included adjustable rackmount extension rails enable the 2U enclosure to be installed securely in a variety of racks from 16 to 24 inches deep.

Featuring dual Noctua fans, the Echo III Rackmount is designed to deliver ultra-quiet operation so that it can be comfortably used in noise-sensitive environments. Rated at 17.1dBA—below the 20dBA ceiling prescribed for use in recording and broadcast studios—the fans spread their noise spectrum to minimize any single frequency’s impact. To further ensure negligible noise levels, the fans are temperature-controlled, automatically speeding up and slowing down smoothly as needed, and the enclosure is engineered to optimize airflow over the installed cards to effectively and efficiently cool the system.

Sonnet includes a 0.7-meter Thunderbolt 3 (40Gbps) cable that transfers data at Thunderbolt 3’s full 2750 MB/s PCIe bandwidth. In addition, Sonnet provides a ThunderLok 3 Thunderbolt connector retainer clip(2) that prevents accidental cable disconnections—just slide it over one end of the cable, and then plug in the connector and secure it to the chassis by turning a thumbscrew. Because of its unique design, ThunderLok remains on the cable so it won’t get lost when not in use.

Get Full Thunderbolt Performance, at a Distance

Whether noisy PCIe card fans make it impractical to use the Echo III Rackmount in a noise-sensitive environment, or because securing it in another room is required, you may find it necessary to put some space between the chassis and computer. No problem! Thunderbolt 3 optical cables (sold separately), available in lengths from 5 to 50 meters, enable you to locate your equipment where you need and connect the pieces without loss of functionality. These thin, lightweight, and tough fiber optic cables are easy to route, and support high-speed data transmission equal to copper Thunderbolt cables.

Fastest External Interface Available. Thunderbolt 3 – the USB-C That Does It All

‍Choose between the Echo III Rackmount and Echo III Desktop to suit your workflow needs. The Echo III Desktop is wrapped in a rugged, yet lightweight aluminum outer shell, resulting in a system light enough to carry without weighing you down, yet sturdy enough to securely protect the installed PCIe cards. 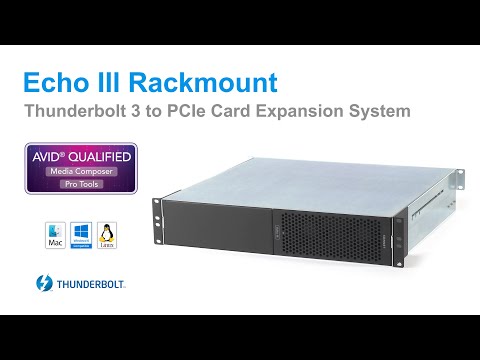