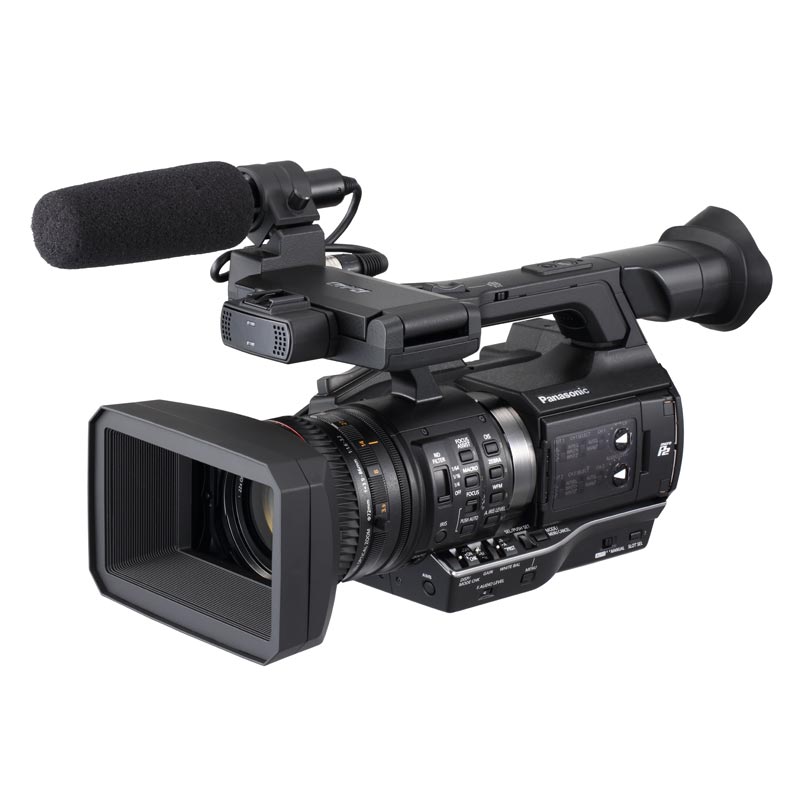 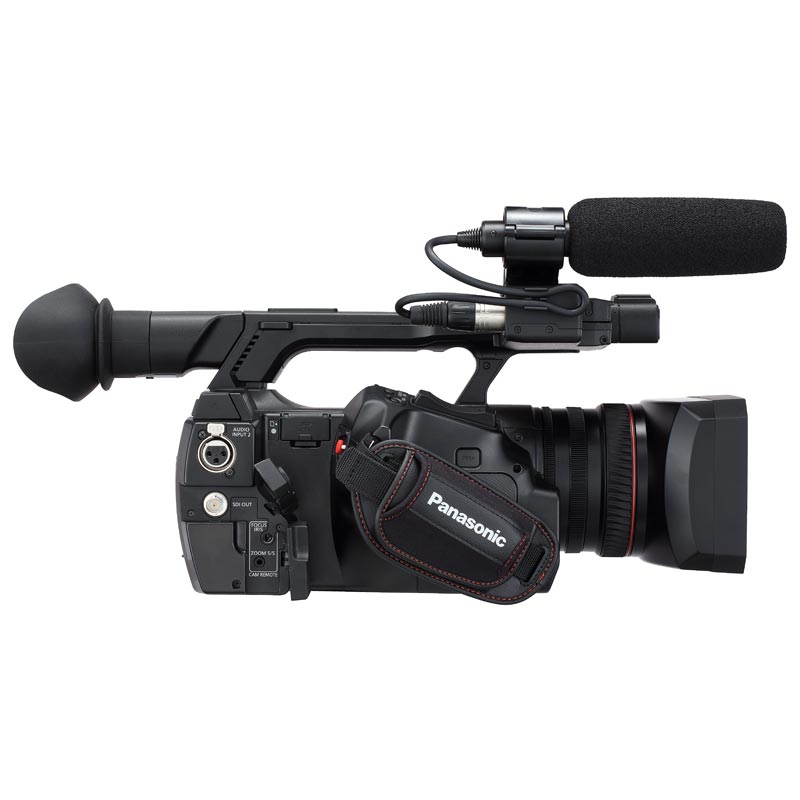 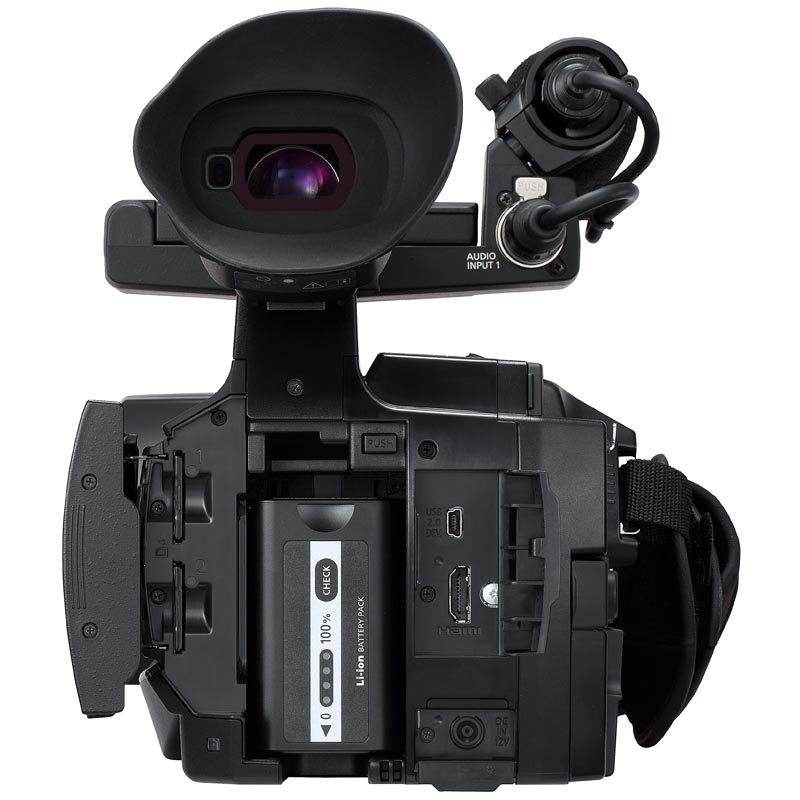 A new update lets you to use fast SD Cards to record AVC-Intra200 and AVC-Intra100 broadcast codecs. Although these cards are not guaranteed to be as reliable as the Micro P2 Cards the new V60 and V90 rated cards with their high consistent write speeds will be reliable in the field.

The AJ-PX230 is a unique new model camera recorder with extremely high cost-performance.
It features a powerful CAM-type 22x zoom lens with three manual rings, a 600% dynamic range with 1/3-type 3MOS (RGB) image sensors, and AVC-ULTRA* multi-codec recording, including the high-quality AVC-Intra200 codec, all in an easy-to-operate, professional camera design.

As the ultimate handheld camera recorder, the AJ-PX230 offers high-quality acquisition for a host of uses, from ENG to video production.

* The AJ-PX230 does not support all of the formats included in the AVC-ULTRA family.

In addition, it is combined with our unique digital signal processing technology, called Chromatic Aberration Compensation (CAC), to minimize colour bleeding in the surrounding image areas and to achieve rich expression with finely rendered nuances and excellent shading.

The AJ-PX230 has three manual rings: a mechanical (cam-type) zoom ring, a focus ring and an iris ring. The operating feel and rib pattern of these rings are carefully designed to make manual operation feel like using an interchangeable lens. The focus ring is knurled for reliable fingertip control of delicate focusing. The seesaw zoom levers (grip/handle) support extra-slow zooming down to 180 seconds.

*1: Flash Band Compensation will not operate while digital zooming.

This function detects and precisely compensates the flash bands (bands of light and dark) that often occur in still cameras equipped with an MOS sensor.

Image Adjustment Function from a Menu

The Variable Frame Rate function (AVC-Intra100)* was inherited from the Panasonic VariCam, which is widely used for producing movies, TV series and TV commercials. Featuring a variable frame rate of 1 to 60 fps, this function creates a wide range of film-camera-like images, such as overcranking for slow-motion and undercranking for quick-motion effects.

* The focusing time varies depending on the shooting conditions and subjects.

The electronic level lets you easily confirm camera tilting on the LCD monitor screen. It helps to keep the camera level during handheld shooting, low-angle shooting and high-angle shooting.

The AJ-PX230 features the AVC-ULTRA codec family. To meet the various needs from mastering to streaming, the image quality and bit rate can be selected to match the application.

An intra-frame compression method that is highly suited to image production. In addition to the conventional AVC-Intra100/50 codec, the AJ-PX230 features the AVC-Intra200 codec with twice the bit rate (10 bit quantization, 4:2:2 sampling, and a bit rate of approximately 200 Mbps for 1080/59.94i). It offers a level of quality that meets the needs, from mastering and archiving.

1080/60p* (50p) full frame progressive recording is supported. In addition to being able to record with the AVC-Intra100 or AVC-LongG25/LongG12 codec, the camera is capable of camera through output from the 3G-SDI and HDMI output terminals.

Even with its high-power zoom lens, the AJ-PX230 is compact and has a low center of gravity. It remains stable during handheld shooting, and provides excellent visibility and a wide field of view. The lens hood with a built-in cover improves convenience and safety while moving. The magnesium alloy diecast chassis is rugged and durable.

The AJ-PX230 is equipped with 2 channel XLR mic/line audio input terminals supporting a +48 V phantom power supply. They are arranged on the front and rear sides of the unit, just like on a shoulder-type model. The front mic terminal is located behind the rear mic mounting section, eliminating problems resulting from catching protrusions on the side panel. The rear external audio terminals are located on the right side for comfortable holding of the AJ-PX230 against the chest during recording, and also permit easy connection and disconnection while holding the camera recorder in shooting position.

The large-capacity battery is housed in the main body, and does not extend beyond the rear panel. This ensures comfortable holding of the AJ-PX230 against the chest. When power is supplied to the DC power supply input terminal using the AC adaptor, the battery can be changed while recording.

The indicator for remaining card capacity is corrected because it has a problem when the format is AVC-G50/24PN, AVC-G25/24PN or AVC-G12/24PN.