Sonnet Technologies is well known for its Thunderbolt 2 and 3 enabled PCIe expansion boxes but did you know they also produce some amazing PCIe cards too? They can work wonders for your Mac, whether they're installed into the chassis, or attached via a Thunderbolt expansion unit.

The Sonnet M.2 4x4 PCIe Gen 3.0 card is an amazing product that can help you create a super fast internal storage array (think 6K or 8K scratch disk) for the new 2019 Mac Pro. Yes, this Super Fast Sonnet Tech card is on Apple's PCIe approved list. Having 16 PCIe lanes, that's 4 PCIe lanes dedicated to each of it’s four M.2 NVMe SSD slots. You'll have to buy those Samsung 970 Pro SSD cards separately, but after you have, you can stripe a RAID 0 across those four M.2 SSDs. That would provide a HUGE 4 TB scratch disk operating at a theoretical max of 8,500 MB per second!

If you need to blend blistering speed with up-to 32TB of storage, check out the Fusion Dual U.2 SSD PCIe card. While it can't quite the M.2's speed, it comes close (up to 3500 MB/s read/write, or 6,250 MB/s in RAID 0 configuration). With support for high capacity U.2 drives, howver, it can give you a large primary video storage platform with space for multiple high resolution projects.

By the way the 2019 Mac Pro has more than one x16 PCIe slot and RAID 5 is also possible using SoftRAID.

Are you editing on Windows or Linux based towers? Sonnet’s card is compatible with them too. This card will even fit in Sonnet's Echo Express III-D PCIe expansion chassis allowing a Thunderbolt 3 enabled MacBook or iMac to have up to 8 TB of external HD or 4K media storage.

Multi-camera editing with Sonnet is Simply Fast too

Transferring or editing those media files can be a bottleneck in a 4K or 6K workflow especially within a multi-camera shoot. So, Sonnet’s 4 port PCIe card, with four powered USB-C ports, means you can connect and edit directly from those SSD drives at full speed. 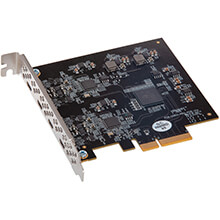