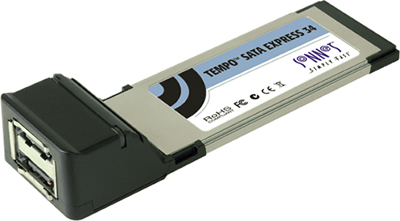 The Tempo SATA Express 34 controller has two external, 3Gb/s, SATA II ports, and plugs directly into a MacBook Pro (15" or 17") or Windows notebooks with an ExpressCard/54 or ExpressCard/34 slot.

Imagine connecting up to 10 drives (1)(2) for high-performance applications, such as Apple's Final Cut Pro. With two external SATA drives attached in a RAID 0 array, the Tempo SATA Express 34 can support sustained write and read data transfer speeds of 100 and 110 MB/sec, respectively, which is about three times as fast as USB 2.0 or FireWire connections to the same drive setup.